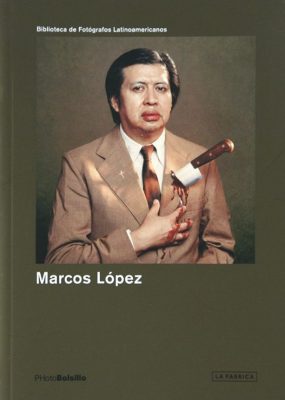 This title offers monographs on the most important Spanish, African and Latin American photographers. “The PhotoBolsillo” series is dedicated to publishing monographs on the most notable Spanish, African, and Latin American photographers of the recent past. Each small-format paperback features full-page, full-colour and black-and-white photographs representing the best of the artist’s portfolio – each of which is captioned with title and year. Additionally there is a Chronology, plus lists of exhibitions and collections in which the photographer’s work has been/is displayed, plus a brief appreciation of the artist by a “PhotoBolsillo” editor.

About the Artist
Marcos López is a photographer and plastic artist. He was born in Santa Fe in 1958. He began taking photographs in 1978. In 1982 he obtained a scholarship from the National Endowment for the Arts and moved to Buenos Aires where he studied by attending workshops with different photographers. In 1987 he was part of the 1st promotion of foreign scholars from the International Film and TV School of Cuba and makes video documentaries. His documentary on tango in Cuba (Gardel Eterno, video U-matic 13 minutes / 1988) is considered his beginning in the aesthetics of Latin Pop.
marcoslopez.com

About the Publisher
LA FABRICA is a publishing house based in Madrid, Spain.
lafabrica.com