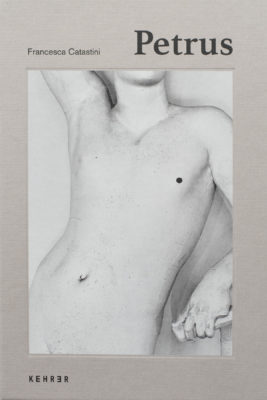 Petrus reflects on a certain rhetoric of masculinity in Western culture. It is about the human drive to define ourselves and the world through a definite form. Form is never stable though. It is the ever-changing result of a never ending tension between forces pushing from within and pressures coming from without. Through a cynical, tender, and arbitrary analysis of what probably cannot be sliced and diced Francesca Catastini plays with archetypes and images considering the way they sculpt ourselves and shape our views. Looking for subtle discrepancies her images go beyond their figurative meaning in order to activate new analogies and connotations.

About the Artist
Francesca Catastini (Lucca, 1982) is based in Tuscany. Raised in a family with a strong scientific background, she developed an early interest for ethology and medicine. At the age of five she made her first (and last) attempt to preserve two little animals, a dead bird and a field mouse, by wrapping them tightly in black bin liners and keeping them in a shoe box. To her mother’s horror, she discovered the box under her bed and immediately threw the experiment away! Apparently Francesca was severely told off, but cannot remember the details… Eventually she decided to keep images, instead of things (if for no other reason than to avoid the smell). She feels that as a highly sensitive person, it is easier to study the facts of life when they are unable to run away.

About the Publisher
Kehrer Verlag is among the world’s leading publishers of photo books. Founded in 1995 by Klaus Kehrer, it is also one of the few independent publishing houses in Germany. In addition to photography, further focal points include contemporary art, art of the 17th through the 20th centuries, and international sound art.