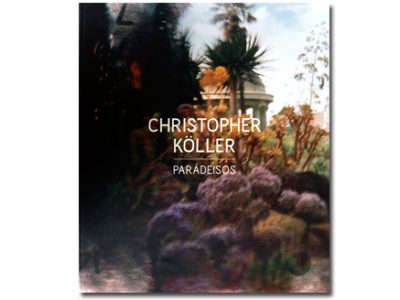 Produced over a period of 12 years,Christopher Koller’s plastic camera photographs of gardens and otherwise mediated greenery forge a very different atmosphere to what one would expect from such subject matter. Warped, stretched and almost affronting in their blurred optical qualities, the images that fill Paradeisos are vivid and almost visceral in their odd beauty.
(source: https://www.perimeterbooks.com/products/christopher-koller-paradeisos)

About the Artist
Christopher Köller trained as a silk-screen printer and then inspired by the Beat writers and an intense curiosity, travelled extensively throughout the late 1960s and ’70s. He returned to Australia to study photography at Prahran under Athol Shmith and John Cato, and after graduating lived in Japan where he took photos and became immersed in the world of Japanese gardens and bonsai from 1983-4. Köller has held solo exhibitions of his photographs, installations and video works in various Australian cities and in Japan, England, Spain and Mexico. His work has been included in group-exhibitions in France, Italy, Spain, and throughout Australia. The Visual Arts Board has awarded Köller two grants and he has been accepted for four residencies, the most recent, in Barcelona in 2008. Köller’s work is held in the collections of the National Gallery of Australia, the National Gallery of Victoria, the City of Monash, Griffith University, the Bibliotheque Nationale of France and the Sata Corporation Collection, Tokyo.
christopherkoller.net

About the Publisher
M.33 is an independent Melbourne based organisation which since 1993 has represented some of Australia’s most interesting photographic artists. They publish and exhibit photography and offer a range of curatorial services.
m33.net.au