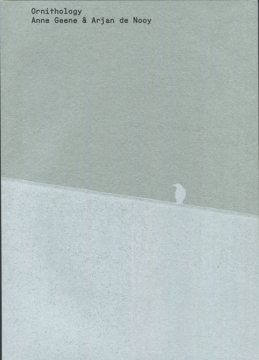 Anne Geene and Arjan de Nooy combine visual tools from the science of birds with the specific characteristics of photography, thereby imparting a fresh look at both. Through their pseudoscientific approach, Geene and De Nooy explore the boundaries between the two disciplines, adding a layer that is usually absent in the representation and science of birds: humour. Their classifications form comical results through creative and associative thinking, and yet they use the scientific method to also create an artistic microcosm that seems far removed from its strictly ornithological counterpart. Together, Geene and De Nooy depart from the classic aesthetic of bird representation.

About the artists
Anne Geene (Breda, 1983) began her studies on photography at the Royal Academy in The Hague and graduated at Sint Joost, Breda.  After this she did the Master Photographic Studies at Leiden University. In 2014, Geene won the ING Unseen Talent Award. Her work is included in various public as well as private collections . With the help of photographs Geene investigates, collects, archives and aranges the world around her. Eventually her findings are analysed and catalogued according to an apparent logic. Apparent, because her interpretation of her data is strictly personal and a hint to our urge to regulate and know everything.
annegeene.nl

Arjan de Nooy (Goes, 1965) studied chemistry and photography. He works both with his own photographs as well as with found material. The stories he constructs give the photographs an artificial context and therefore give them their meanings. An ongoing project is a fictional history of  Dutch photography, in which both oeuvres and biographies of fictional photographers are presented as contemplative texts.
arjandenooy.com

About the Publisher
De Hef is a project publisher. Books are only one part of broader initiatives in the field of landscape architecture, design and architecture.
dehefpublishers.nl