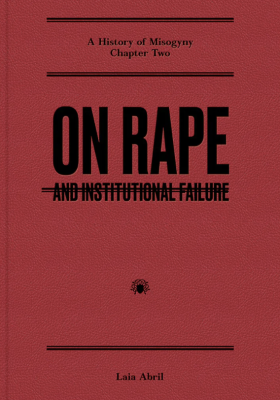 Laia Abril’s On Rape is a visualisation of the origin of gender-based stereotypes and myths, as well as the failing structures of law and order, that continue to perpetuate rape culture.

Abril collates and interweaves compiled testimonies, political proclamations, historical archives, popular and traditional beliefs, as well as society’s structural failures to deal with sexual violence. To avoid feeding the systemic victim-blaming society, Abril switches the visual narrative from the survivors to the institutions, allowing her opportunity to address transgenerational trauma and social accountability.

On Rape is the second chapter of Laia Abril’s long-term project ‘A History of Misogyny’, a visual research through historical and contemporary comparisons of the systemic control of women in the world.

Laia Abril is a research-based artist working with photography, text and sound. She focusses on long-term projects on uneasy and hidden realities about women rights, grief and bio-politics. She is the author of several award winning books: The Epilogue (2014, Dewi Lewis), Lobismuller (2016, RM) and On Abortion (2018 Dewi Lewis) nominated for the Deutsche Börse Prize and the winner of the Aperture-Paris Photo Best Book Award. She has exhibited in more than 15 countries and her work is in collections such as the Centre Pompidou, FRAC, Musée de l’Elysée, Fotomuseum Winterthur, MoCP and MNAC. Her career has been recognised with the Prix de la Photo in Arles, The Hood Medal in London and the FOAM Paul Huf Award in Amsterdam, among others. Abril is represented by the Parisian gallery Les Filles du Calvaire.
(source: https://www.setantabooks.com/products/on-rape-and-institutional-failure)

About the Artist
Laia Abril (b. 1986) is a Catalan artist whose work relates to bio-politics, grief and women rights. Her books include The Epilogue (2014), which documents the indirect victims of eating disorders; and a long-term project A History of Misogyny which includes On Abortion (2018), about the repercussions of abortion controls in many cultures; and On Rape (2022) about gender-based stereotypes and myths, as well as the failing structures of law and order, that perpetuate rape culture.
laiaabril.com
(source: https://en.wikipedia.org/wiki/Laia_Abril)