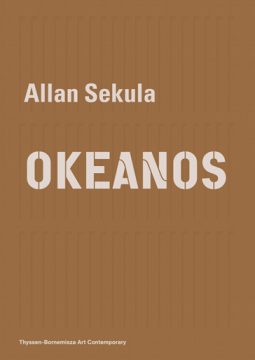 This publication intersperses essays from scholars, historians, and thinkers with a selection of Allan Sekula’s seminal texts and excerpts from his private notebooks. The title is a reference to Okeanos—son of Gaia, the Greek goddess of the earth—who ruled over the oceans and water. Made and written across the decades, Sekula’s sketches and texts focus on maritime space and the material, economic, and ecological implications of globalisation. In projects such as his magnum opus Fish Story (1989–95), or films like Lottery of the Sea (2006) and The Forgotten Space (2010), Sekula provided a view from and of the sea. This publication expands on these oceanic themes, seeking to honor the scope and complexity of the late artist-theorist’s work, and situate his ideas in current political, social, and environmental discourses. The book is divided thematically: the section “Containerisation” focuses on the sea as a site of infrastructural complication; Sekula’s work Black Tide / Marea negra (2002–3) is also revisited, which explores environmental violence and contamination as well as their social implications; a selection from Sekula’s personal drawings are accompanied by an essay by photo historian Sally Stein; various essays readdress Sekula’s legacy in the age of the Anthropocene; and a number of case studies by contemporary artists, writers, and thinkers examine ideas that overlap with Sekula’s and expand on his interests.

About the Author
Allan Sekula (January 15, 1951 – August 10, 2013) was an American photographer, writer, filmmaker, theorist and critic. From 1985 until his death in 2013, he taught at California Institute of the Arts. His work frequently focused on large economic systems, or “the imaginary and material geographies of the advanced capitalist world.”
allansekulastudio.org

About the Publisher
Sternberg Press grew out of the small publishing house known as Lukas & Sternberg, founded in 1999 by Caroline Schneider. With a focus on art criticism, theory, fiction, and artists’ books, the Berlin-New York based publishing endeavor was set in motion with a pocket book series—edited in part with Nicolaus Schafhausen. Dedicated to an expanded notion of writing on art, Sternberg Press has created a formidable platform in which practitioners from the fields of art and culture (architecture, design, film, politics, literature, and philosophy) can engage in a critical discourse. Each book is a special object celebrating creative publishing at its best, based on both meticulous editorial decisions and distinctive design. Through both commissioned and translated works, Sternberg Press seeks out the blind spots within contemporary discourse and offers a timely response to the related debates.
sternberg-press.com