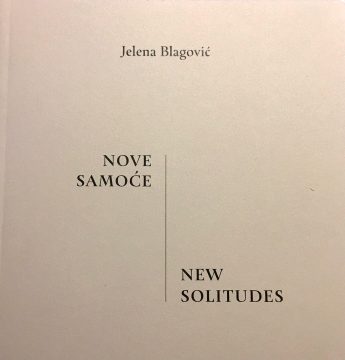 In New Solitudes, the photographic concept tackles the topic of motherhood, offering an intimate perspective on various fears, doubts and introspection faced by the author and her close friends at the point in time when they decide to become, or have already become, mothers. This generation of young women on average give birth later on in their lives and have fewer children compared to their own mothers. It is not unusual that some women decide not to become mothers at all. For each of them, the reasons for delaying or not realising motherhood are diverse, as are their attitudes to mothering. What all portrayed women have in common are different shades of fear, the overwhelming new sense of responsibility and anxiety about losing a part of themselves – the loss of mental and physical freedom. Solitude, which most women learn to appreciate and enjoy only at an adult age, irreparably changes with motherhood. This state between different roles, the realisation that by having a child the woman is transformed as an individual, is shown through these staged portraits which visualise moments of absence and altered, new kind of solitude faced by each of these women individually. Most often in privacy of their own home as well as within themselves.

About the Artist
Jelena Blagović was born in 1983 in Zagreb, Croatia. She finished the photography programme at the Istituto Superiore di Fotografia e Arti Visive in Padua, Italy and continued her education at the University of Westminster in London, England, where she earned her BA in Photographic Arts and MA in Photographic Studies. She works as an Assistant Professor at the Department of Cinematography, Chair of Photography at Academy of Dramatic Art in Zagreb, and is the Head of the Academy’s Gallery f8. She has exhibited her work locally and internationally on 15 solo and numerous group shows and has received a number of awards and prizes.