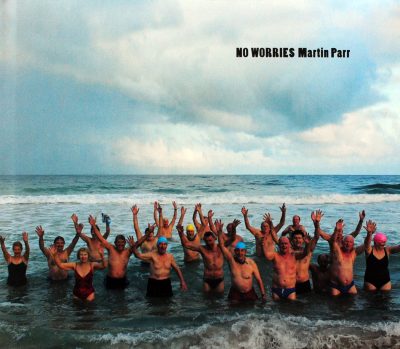 In 2011 Magnum photographer Martin Parr set out to photograph three Western Australian port cities, Fremantle, Port Hedland and Broome. Each town was a unique setting for a photographer famed for his images of British seaside culture in the publication Last Resort. Using his unmistakabley intimate and satirical style, Parr went about photographing Australian cliches, full of saturated colours and flash photography. The resulting photographs, published here for the first time, are an invaluable collection from this world-renonwed British photographer.

‘No Worries. This is a phrase that seems to encapsulate the rather delightful, laid back approach that the West Australians adopt. I quickly noticed that nearly everyone I met in Broome and Port Hedland in particular used this phrase, and once observed the title was a done deal.’

‘My previous encounters in Australia have been urban, in the cities of Melbourne and Sydney, so it was good to see smaller towns, all different, but full of character. I feel I know the country a lot better now. I am a nosy person and with a camera as an excuse you can witness people’s lives and hear their stories.’

‘Being Sunday morning the local organic market is in full swing. Here you can find the nucleus of the old Fremantle hippies, selling their assorted crafts and delicacies. You can also enjoy a solar heated pastie, gently warming in the spring sunshine. Lots of great locally grown fruit and veg, the place is humming. At lunchtime I visit the Fremantle Sailing club, and, despite being off season, the place is packed for the Father’s Day lunch. In the background all sizes and shapes of yachts are being spruced up ready for the start of the sailing season. It is early spring here, but to this Englishman, it feels like high summer as the temperature is well over 20 degrees.’
– From the diary of Martin Parr printed in No Worries.

About the Publisher
Australian-based award winning T&G Publishing specialises in establishing a creative dialogue with the acclaimed photographers they publish. Using the finest design and most advanced printing practices, T&G are committed to showcasing elite photographic art.
tgpublishing.com