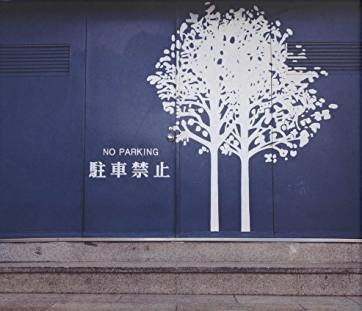 One implication of this series is that we live in an almost inhuman environment, overdetermined by the network. Some of the buildings on show are gridded to infinity and stand rank on rank to the horizon. More intimate spaces are piled high with placards and script under skeins of power-lines and assorted wires. All the same, and despite this wealth of contemporary markers, Patrícia Almeida’s project has its humanist side. She remarks on the Ages of Man. Youngsters kill time, and act out childish and youthful scenarios at road crossings and on the city’s streets. Salarymen walk together purposefully. Pedestrians with baskets return to base. Encumbered cyclists sustain the domestic theme. It is easy to imagine domestic spaces beyond the facades, and all manner of particular interests, for there are quite different styles and costumes amongst her passers-by. Patrícia Almeida’s Tokyo is a city with its tender side, and the promise of intimate and familial moments. Above all it is a city in which humanity appears to be vulnerable. It is not just that the buildings are enormous and out of proportion to the human scale but that they are accessed by pedestrians crossings on complex thoroughfares. Will the city with its profuse and labyrinthine culture be too much for them all? This is her suggestion time and again.

About the Artist
Patrícia Almeida (1970-2017), photographer and co-founder of GHOST Editions together with David-Alexandre Guéniot. She graduated in History at Nova University (F.C.S.H) in Lisbon and Photography at Goldsmiths College in London. She was interested in photography as a language and a territory of research and artistic creation. Her exhibitions frequently took the shape of installations working with various means of image production: photographic prints, artist books, posters, billboards, newspapers, videos or projected image. Her projects often started as books or artist publications, an important aspect of her work.
In 2009 she was nominated for the Portuguese contemporary art prize Besphoto for her exhibition and book project ‘Portobello’.
She was a member of POC/Piece of Cake, a network of European and North American artists working with photography and video.
patriciaalmeida.com
(source http://www.patriciaalmeida.com/about.html)
About the Publisher
Piece of Cake was created in Rouen in 2002 at the initiative of French photographer Charles Freger. The original group was comprised of artists from several different European countries including France, Germany, Switzerland, The Netherlands, Portugal and England among others. In 2009, Cara Phillips initiated the creation of the North American Cake Collective, with members in various cities in the US, Vancouver and Mexico City. The collective’s main focus is to provide support and connection for artists who have a deeply committed personal practice but who also want to engage in a communal experience.
cake-collective.com
(source: https://cake-collective.com/Info)
Love0 Share Tweet Share Pin