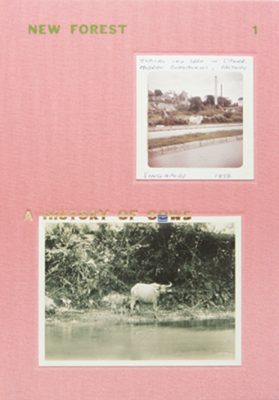 In 1935, a herd of feral cattle was spotted roaming Singapore. Since then, alleged sightings have been rare. Reports came mainly from Japanese soldiers in World War II and occasionally from local residents. If these reports are true, these cows were confined to the areas of Tampines, Punggol, Sembawang and Pulau Ubin. In 2016, a cow was discovered on Coney Island but died shortly after. Some believe that wild cows still roam Singapore.

Conceived by The Institute of Critical Zoologists (ICZ) between 2014 and 2019, this book features images of cows in Singapore from the 1890s to 2016 from ICZ’s archive.

About the Artist
Singaporean visual artist Robert Zhao Renhui (b. 1983) works chiefly with photography but often adopts a multi-disciplinary approach, presenting images together with documents and objects in the form of textual and media analysis, video and photography projects. His artistic practice investigates man’s relationship with nature, utilising convincing narratives to invoke doubts in its audience towards the concept of truth and its portrayal. His works has been exhibited globally, having held solo exhibitions in Singapore, China, Japan, Australia, and Italy, as well as participating in various biennales and photo festivals.
criticalzoologists.org/main
(source: https://www.shanghartgallery.com/galleryarchive/feeds/detail/4451)

About the Publisher
The Institute for Critical Zoologists aims to develop a critical approach to the zoological gaze, or how humans view animals. Urban societies live in relative isolation from animals; however, our demand and gaze upon them have grown significantly over the last century. It is undeniable that looking at animals is considered both desirable and pleasurable in societies. Animals convey meaning and values that are culture-specific, and in viewing the animal, we cannot escape the cultural context, political climate and social values in which that observation takes place. The relationship between animals and humans has reached an appalling state. There is increased visual exploitation of animals (there are more then a thousand zoos in the world and twice as many natural history museums); and there is exploitation of animals as commodity (tiger parts are traded for commerce to save them in China). Not to mention the environmental, ecological, cultural threats of zoos, animal performances, animal agriculture, poaching, economic-driven conservation biology, natural history museums displays and animal memorabilia, to which human anthropomorphism plays a pivotal role. We seek to develop a Critical Zoological Gaze that pursues creative, interdisciplinary research that includes perspectives typically ignored by animal studies, such as aesthetics; and to advance unconventional, even radical, means of understanding human and animal relations. The institute also discourages anthropomorphism in the appreciation and understanding of zoology
criticalzoologists.org
(source: https://www.criticalzoologists.org/mission/mission.html)