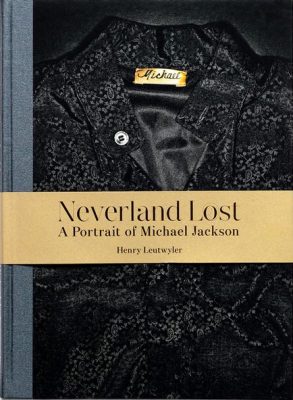 With an exacting eye for celebrities and their possessions, the Swiss-born, New York-based photographer Henry Leutwyler has portrayed the faces and the lives of the famous for virtually every one of the world’s most prominent magazines. Leutwyler has a gift for the meticulous rendering of possessions and culturally significant artifacts (Andy Warhol’s paintbrush, Bob Dylan’s harmonica, Janis Joplin’s guitar), and Neverland Lost presents his record of the contents of the late Michael Jackson’s famous Peter Pan paradise at the Neverland Ranch, in Santa Barbara, California. Leutwyler gained privileged access to Jackson’s possessions when they were due to be auctioned off (but were eventually withdrawn), shortly before Jackson’s death on June 25, 2009. Creating incredible taxonomies of Jackson’s huge array of possessions, as they were briefly exhibited at the Ranch, Leutwyler subjects these items to a degree of scrutiny that makes the viewer feel she or he could slip on one of those iconic spangly gloves. It is of course Jackson’s performance accessories-the accessories by which he was instantly identifiable to all, such as the gloves, the hats and shoes-that leap out of this fascinating volume. Laying bare the components and props of the Michael Jackson myth, these photographs create a strange and fantastical visual story of “The Boy Who Wouldn’t Grow Up,” at the moment he was forced to leave Neverland.

About The Artist
Born in Switzerland in 1961, Leutwyler is a self-taught photographer with a stubborn streak and unflappable love for the medium. His grandfather and father were both printers. He decided not to follow their path, instead to travel and photograph, soaking up color and culture from around the world. After being rejected by one of Switzerland’s best photography schools, he opened his own photo studio in Lausanne, photographing cheese, chocolates and watches and went bankrupt in a year-and-a-half. In 1985, Leutwyler moved to Paris where he apprenticed with photographer Gilles Tapie and rapidly established himself as an editorial photographer. A decade later, Leutwyler moved to New York City. He has photographed the likes of Michelle Obama, Julia Roberts, Tom Wolfe, Iggy Pop, Rihanna and Martin Scorsese to name a few.