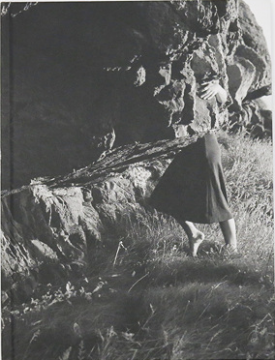 Published to coincide with the major exhibition Entre Nous: Claude Cahun and Clare Rae at Centre for Contemporary Photography, Melbourne, Clare Rae’s Never standing on two feet (Perimeter Editions 033) serves as both an ode to the legendary avant-garde queer artist and writer Claude Cahun and a telling expansion of the Melbourne artist’s own performative photographic practice. The body of work which was made during a 2017 residency with Archisle: the Jersey Contemporary Photography Programme to research the Cahun archive held by Jersey Heritage, repositions Rae’s particular mode of self-portraiture to fall in the windswept Jersey landscape. In the process, it places her practice in direct conversation with that of Cahun, an artist who was associated with the Parisian surrealist movement in the 1920s, before relocating to Jersey with her female partner Marcel Moore in the 1930s, where she would create the vast archive gender-ambiguous portraits for which she later garnered such acclaim.

Rae’s work not only considers Cahun’s relationship to the history, cultural and geographical landscape of Jersey, but enacts a wider investigation and subversion of the male gaze and its relationship to both the female body and our imagining of the landscape.”
(source https://www.perimeterbooks.com/products/pre-order-clare-rae-never-standing-on-two-feet)

About the Artist
Clare Rae is an artist based in Melbourne, Australia. In her photographic practice Clare explores ideas of performance and gesture to interrogate and subvert dominant modes of representation. Her work is informed by feminist theory, and presents an alternate and often awkward experience of subjectivity and the female body, usually the artists’ own.

Recent projects have engaged with site specificity, involving works that are captured and displayed within the same environment. A central interest within her practice is the exploration of performance documentation, specifically how the camera can act as a collaborator, rather than mute witness, to the performer. Known for her engagement with domestic and institutional spaces, recently Clare’s work has been captured and exhibited in locations such as the Australian Centre for Contemporary Art (ACCA), the National Gallery of Victoria, Monash University, the Abbotsford Convent, Sutton Project Space and the Substation, Melbourne.
clarerae.com

About the Publisher
Perimeter Editions is the in-house publishing imprint of Perimeter Books. Launched in August 2012, its focus rests on publishing autonomous limited-run artist books featuring artists and photographers from Australia and abroad.
perimetereditions.com