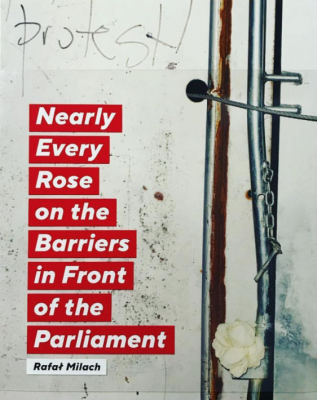 The pictures in the book were taken in Warsaw in July 2017 during public protests against the controversial judicial reform proposed by the ruling right-wing Law and Justice party. Initiated at the time, the makeover of the judiciary was finally completed by the Polish government in July 2018, strongly undermining the separation of powers in Poland. The photographic collection of the white roses that the protesters attached as symbols of non-violent resistance to the crowd-control barriers in front of the Parliament is banal and accidental. It echoes the simple, non-heroic gestures made during the series of demonstrations in the summer of 2017.

About the Artist
Rafał Milach (b. 1978 ­in Gliwice, Poland) – visual artist, photographer, author of photo books. His work focuses on topics related to the transformation in the former Eastern Bloc. Lecturer at the ITF Institute of Creative Photography of the Silesian University in Opava, Czech Republic and Katowice Film School at the Silesian University, Poland. His award-winning photo books include The Winners, 7 Rooms, and The First March of Gentlemen. Rafał Milach has received scholarships from the Polish Minister of Culture and National Heritage, Magnum Foundation, and European Cultural Foundation. Finalist of the Deutsche Börse Photography Foundation Prize 2018 and winner of the World Press Photo competition. Co-founder of the Sputnik Photos collective. His works have been widely exhibited worldwide, and can be found in the collections of the MoMA Warsaw, CCA Ujazdowski Castle in Warsaw, the ING Polish Art Foundation, Kiyosato Museum of Photographic Arts (Japan), and Brandts Museum in Odense (Denmark). Rafal Joined Magnum Photos in 2018 as a nominee member.
rafalmilach.com

About the Publisher
JEDNOSTKA Gallery, founded by Katarzyna Sagatowska in 2017 in Warsaw, represents artists of different generations distinguishable for their remarkable personalities and unique creative work. The ambition of the gallery is to initiate interdisciplinary projects that comment on contemporary phenomena. Its mission is also to promote art collecting, with a special focus on photography. The gallery conducts publishing and educational activity addressed both to professional audiences, and art lovers. We want JEDNOSTKA to be an open and friendly place, visited frequently and eagerly by viewers.
jednostka.com