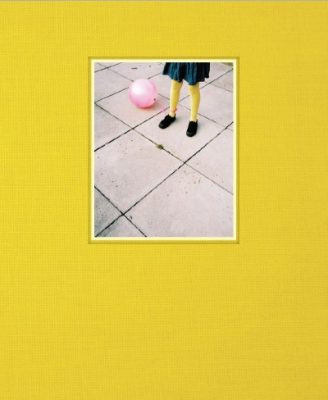 Essay by Professor Jo B. Paoletti

‘My Favourite Colour Was Yellow’ is a documentary photo book recording ‘the age of pink’. Pink has become synonymous with femininity to the extent that it is easy to take it for granted, but it hasn’t always been this way. In the 19th century boys were traditionally dressed in pink. This latest phenomenon has evolved in line with consumerism since the 1980’s.
Kirsty Mackay set out to photograph girls with their pink possessions as a way to understand how this one colour has become dominant. Working over a five year period, making portraits of the girls in their bedrooms and on the High St, Kirsty has created a document of this time for girls growing up in the UK.
After a period of documenting Kirsty began to probe deeper and the title of the book ‘My Favourite Colour Was Yellow’ reflects the theme at the heart of the book – a lack of choice. Kirsty offers us a sensitive and intimate glimpse into the lives of these girls own private worlds. An essay by American author and costume historian Jo B. Paoletti, lends the photographs a cultural and historical context.

About the artist:
Kirsty Mackay is a British social documentary and portrait photographer. She gained an M.A. from the renowned school of photography in Newport, Wales. Kirsty is driven by research led self-initiated long form projects; injustice on any scale fuels her work. Her latest work in progress The Fish That Never Swam takes on a more personal and collaborative approach. Working with a group of people in Glasgow including her family members she explores her own roots and the attachments we make to places. Her work has been published widely including Time, Le Monde, The Telegraph, The Observer and BJP.
kirstymackay.com