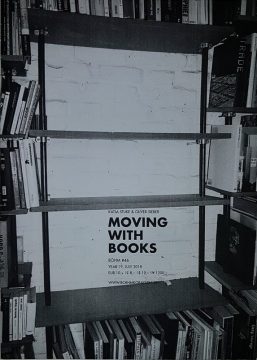 Issue 46 of the staple-bound, black-and-white periodical Böhm, Moving with Books ostensibly features the artists’ bookshelves during a move. Frontal and angled photos record a bookcase’s transition from bare to brimming as it is gradually populated by titles on topics ranging from Walter Pfeiffer, John Baldessari, and Gerhard Richter to London, New York, and Iraq.