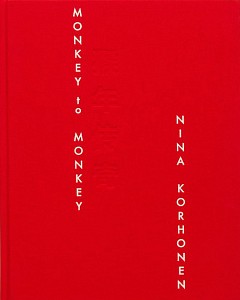 The photographs  in the book Monkey to Monkey were taken in northern and northwest China, and occasional trips to Beijing and Shanghai, between 2004 and 2016. The monkey is the ninth animal of the twelve zodiac animals in Chinese astrology. The twelve animals cover each year, and when twelve years have passed, the cycle begins again. The year of the monkey is a sign of discovery, activity, intelligence, curiosity and ‘everything is possible-thinking’.

About the artist
Nina Korhonen (b.1961 Tampere, Finland) is a Finnish photographer who has been living in Stockholm since 1981. Korhonen studied at the Nordic Photo School Bishop-Arnö 1987-1990.
ninakorhonen.com