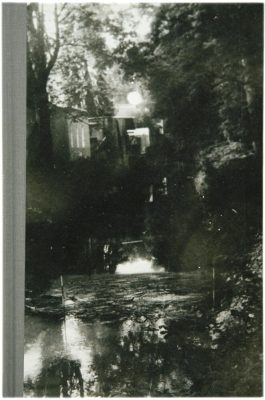 This is an ancillary publication published on the occasion of the Miroslav Tichý exhibition at the Douglas Hyde Gallery that took place from the 21st of November 2008 to the 22nd of January 2009. It includes a selection of the works from the exhibition, which are photographs taken by Miroslav Tichý from 1960 to 1995. This photobook and catalogue comprises a combination of Tichý’s images – conventional images taken on ordinarily functional cameras and images taken on homemade or self-repaired cameras of a less acceptable quality both photographically and ethically. Miroslav Tichý was known to regularly protest and act against the communist regime of Czechia during the 1950s, eventually leading to his being shunned from society due to his radical ideals which went against the government. It was during this time in his life that Tichý began to make his own cameras from loose materials that were easily accessible, and use them to subtly photograph young women and girls when they least expected it or were not even aware.

About the Artist
Miroslav Tichý (1926 – 2011, Kyjov) was a Czech photographer who photographed from the 1960s until 1995, taking thousands of surreptitious pictures of women in his hometown of Kyjov in the Czech Republic, using homemade cameras constructed of cardboard tubes, tin cans and other at-hand materials. Most of his subjects were unaware that they were being photographed.

‘We see women photographed from the rear, from the front, from the side; we see their feet, legs, buttocks, backs, faces, as well as complete bodies [as when drawing a nude at the Academy]; we see them walking, standing, sitting, bending over, reclining. There are a few nudes, though the poor image quality sometimes makes it difficult to determine if we are looking at a nude or a woman with not much on. […] Whatever eroticism is present is limited to that of the voyeur; these women are not inviting us into their world.’ – R. Wayne Parsons writing about Tichý’s work in The New York Photo Review.
(source: https://en.wikipedia.org/wiki/Miroslav_Tich%C3%BD#cite_note-nypr-10)

About the Publisher
The Douglas Hyde Gallery was founded in 1978 by Trinity College and the Arts Council of Ireland. The Gallery is also known for its publications, which are sold and distributed worldwide. Exhibition catalogues are usually published in a consistent house style, and there are over sixty titles in the current series.
(source: https://thedouglashyde.ie/)