Midnight At The Crossroads 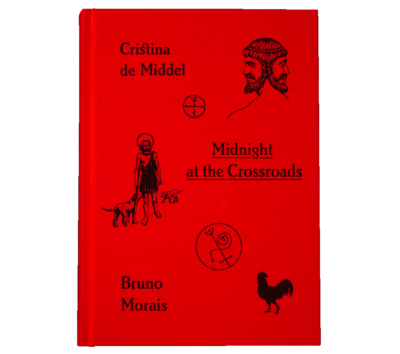 Esù is one of the most enigmatic entities in the cosmogony of West African religions and he crossed the Ocean hand in hand with the the slaves to land in a new world where forced labour, lack of freedom and missionaries would force a transformation that lasts until today in the global understanding of African rooted religions. Midnight at the Crossroads documents and records these transformations and adaptations from its origin in Benin to Cuba, Brazil and then Haiti. Esù starts as a totem in Benin, becomes a child in Cuba, then a young seductive man in Brazil and finally an old man in Haiti, but it is always a confusing spirit that questions your certainties and makes you doubt along the way.

About the Artist
Cristina de Middel (b. 1975) is a Spanish documentary photographer and artist living and working in Uruapan, Mexico. De Middel self-published The Afronauts in 2012, a photobook about the short-lived Zambian space program in Southern Africa. The book quickly sold out and the work was met with critical acclaim. She was nominated for the 2013 Deutsche Börse Photography Prize for The Afronauts,. In 2013, de Middel received the Infinity Award from the International Center of Photography. In 2017 she became a nominee member of Magnum Photos and in 2019 an associate member.