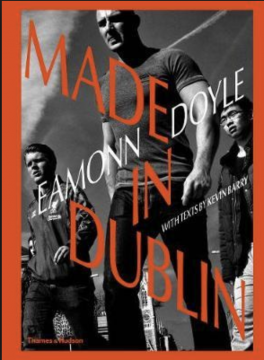 Focused on D1, Dublin’s city centre, Eamonn Doyle’s three major bodies of work, ‘i’, ‘On’ and ‘End’ – with new and previously unpublished images brought together here for the first time – tell the tale of today’s Dublin and, in doing so, tell a broader story of today’s Ireland. Setting aside the nostalgia and cliché so often seen in ‘stories of Ireland’, Doyle’s vernacular photography is a thrill to the system, revealing the extraordinary within the ordinary to paint a striking portrait of a modern and multicultural capital city.

Vivified in colour, the commonplace is seen anew, the everyday made epic as the city’s inhabitants appear in stark, graphic black and white going about their daily business. Far from pedestrian, Doyle’s work is the archetype of good street photography: real life brought to life through the lens and voice of the street. Punctuating Doyle’s photography are specially commissioned narratives by celebrated writer Kevin Barry, evoking the sights, smells, sounds, and sensations of a Dubliner’s daily life.

About the Author
Born in Dublin in 1969, Eamonn Doyle graduated with a Diploma in Photography from IADT in 1991. He spent much of the next twenty years producing music and working in the independent music business, founding the Dublin Electronic Arts Festival (DEAF) alongside the record labels D1 Recordings and Dead Elvis. He returned to photography in 2008. His debut photobook i, described by Martin Parr as ‘the best street photo book in a decade’ was published in March 2014. Most of his work is produced in and around the Dublin city centre location where he has lived for the past 20 years.
eamonndoyle.com

About the Contributors
Niall Sweeney is an artist and designer from Dublin, Ireland. He is one half of Pony Ltd, a graphic design studio based in London.Working in Britain, Ireland and internationally, output at the studio ranges from popular culture to the avant-garde, from high-brow to low-brow, creating for print, screen, three dimensions, sound and performance. Niall previously released HEAD, a series of 60 original monochrome paintings, with Hen’s Teeth in November 2017 in the RDS.
Kevin Barry (born 1969) is an Irish writer. He is the author of three collections of short stories and three novels. City of Bohane was the winner of the 2013 International Dublin Literary Award. Beatlebone won the 2015 Goldsmiths Prize and is one of seven books by Irish authors nominated for the 2017 International Dublin Literary Award, the world’s most valuable annual literary fiction prize for books published in English.

About the Publisher
Thames & Hudson was founded in 1949 by Walter and Eva Neurath. Their passion and mission was to create a ‘museum without walls’ and to make accessible to a large reading public the world of art and the research of top scholars. To reflect its international outlook the name for the company linked the rivers flowing through London and New York, represented in its logo by two dolphins symbolizing friendship and intelligence, one facing east, one west, suggesting a connection between the Old World and the New. Today, still an independent, family-owned company, Thames & Hudson is one of the world’s leading publishers of illustrated books with over 2,000 titles in print. They publish high-quality books across ‎all areas of visual creativity: the arts (fine, applied, decorative, performing), architecture, design, photography, fashion, film and music, and also archaeology, history and popular culture.
thamesandhudson.com