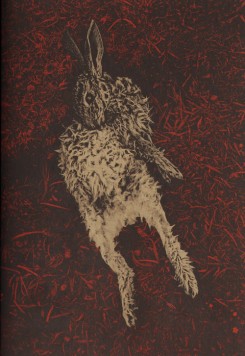 Macquenoise is the bittersweet portrait of a mother and son who live a secluded life with only animals for company, at the mercy of the seasons. From this oedipal relationship wells up a violence suffocated by a state of immobility. Sometimes, a look seems to be a cry for help, a warning that we heed while remaining mute, powerless. Macquenoise might well be the name of a dance of death. The memory of an original sacrifice from the very edge of a horizon that sighs, between light and darkness. But it is a village on the fringes of Belgium, on the French frontier. We see there the shadow of the mother, planted like a knobby oak-tree, and that of the limping son. Two characters so deeply engrained in the earth they live on that they have taken root there forever.

About the Artist
Pierre Liebaert (°1990, Mons) is a belgian photographer currently based in Brussels, Belgium. He graduated from l’École Supérieure des Arts de l’image « Le 75 » in Brussels. His series, Macquenoise, was published by the belgian editor Le caillou bleu. Very often immersive, his projects are often long-term and devour him. Although they are mainly photographic, his series Libre Maintenant builds itself around an installation composed of a film, images, music, audio recordings and texts.

About the Publisher
Le caillou bleu publishes photographic works of every kind, without favouring any specific artistic trend. They respect the original spirit of each piece of work and operates in direct contact with the authors-photographers. Le caillou bleu acts as a springboard for photographers aiming to reach a wider public. We produce quality publications for targeted, international distribution.