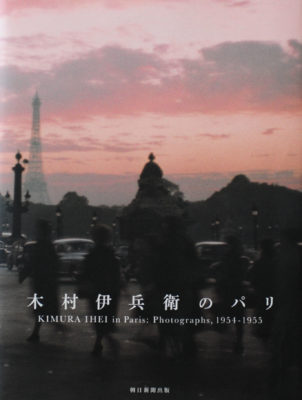 The precious documents of Paris in the 1950s photographed by the most famous Japanese photographer, Ihei Kimura (1901-1974). These works were partly known only through his book, ‘Paris,’ published in 1974. After thirty years of this publication, the 174 photographs of Paris in colour have newly edited together with many unpublished works.

About the Artist
Ihei Kimura (12 December 1901 – 31 May 1974) was one of the most celebrated Japanese photographers of the twentieth century, particularly known for his portrayal of Tokyo and Akita Prefecture.

About the Publisher
The Asahi Shimbun lit. ‘morning sun newspaper’, English: Asahi News) is one of the four largest newspapers in Japan. Founded in 1879, it is also one of the oldest newspapers in Japan and Asia. Its publisher, The Asahi Shimbun Company, is a media conglomerate with its registered headquarters in Osaka. It is a privately held family business with ownership and control remaining with the founding Murayama and Ueno families.