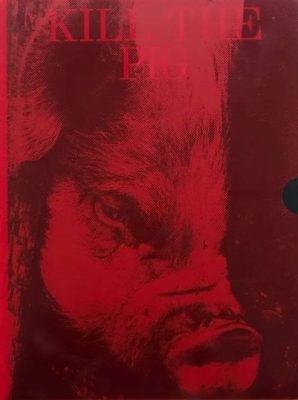 The photobook “Kill the Pig” features two early series by the Japanese photographer Masahisa Fukase. Both series belong to Fukase’s earliest works that together constituted Fukase’s first solo exhibition titled “Kill the Pig” in 1961. Fukase photographed the series “Kill the Pig” in a slaughterhouse in the Shibaura area of Tokyo using both black-and-white and color film. The color photographs were reserved mainly for the scenes that feature blood and gore but the series as a whole is shocking and graphic, with Fukase not “simply directing his gaze at the horses, cattle and pigs awaiting their fate, but at something else lying alongside them loke a shadow.”

“Naked,” the series that accompanied “Kill the Pig” both at the 1961 exhibition and in this photobook, features photographs Fukase and his then-partner Yukiyo Kawakami. While seemingly unrelated in their subjects and styles, the series together form a complex statement “about the cruelty of the two poles of life,” as the “Naked” series includes a harrowing image of a stillborn baby—Fukase’s and Kawakami’s first child.

About the Artist
Masahisa Fukase (Hokkaido, 1934 – 2012) is considered one of the most radical and experimental photographers of the post-war generation in Japan. He would become world-renowned for his photographic series and subsequent publication Karasu (The English title: Ravens, 1975 – 1985), which is widely celebrated as a photographic masterpiece. And yet the larger part of his oeuvre remained largely inaccessible for over two decades. In 1992 a tragic fall had left the artist with permanent brain damage, and it was only after his death in 2012 that the archives were gradually disclosed. Since then a wealth of material has surfaced that had never been shown before.
masahisafukase.com
(source http://masahisafukase.com/biography/)

About the Publishers
The(M) éditions was founded in 2015 by Marie Sepchat.  Specializing in the publishing of photography books, the(M) éditions publishes books that “feel good”, designed as singular objects, in limited editions. Each book offers a unique aesthetic and sensory experience, in harmony with the work of the artist.
themeditions.com

From September 2019, IBASHO is collaborating with the Paris-based publisher the(M) éditions, building a catalogue of Japanese photobooks. The first publication of this partnership, so it goes by Miho Kajioka, won the 2019 Prix Nadar by Gens d’Images.
ibashogallery.com