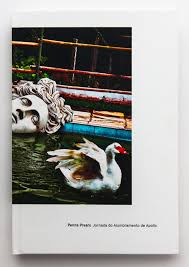 A collection of series from the last decade by Penna Prearo becomes a photobook, by the publisher Madalena. Edited by Claudia Jaguaribe, the retrospective marks the photographer’s performance, minimalist and pop style, who also signs the poems that sew the entire work. Photography tells stories / with or without a past. / When that becomes impossible / photography reinvents itself. The poem that opens the series GRANDE AQUÁRIO para Pequenos Tubarões, the first of the photobook Jornada do Alumbramento de Apollo, is by Penna Prearo, author of the photographs and poetry that fill the work. She says a lot about him, she says about “being a performer in photography long before it became a trend”, as Claudia Jaguaribe, responsible for editing, says.
Altogether 19 photographic series were gathered based on the idealization of Agnaldo Farias, who signs the book’s presentation text, with the objective of
to rescue the work done in the last ten years by the artist. The title, taken from the essay Journey to the Alumbramento by Apollo, concerns
the artist’s ability to work with images, expand them, process them, based on his pilgrimages that end up combining the image of a duck next to a Greek bust. Roman, for example, “both floating in the putrid and slimy water of an abandoned pool, which is a synthesis. But the mystery of the world depends more on how you look than what you look at, a finding that appears to be the touchstone of Penna’s poetics”, says Agnaldo in his text.

About the Artist
Penna Prearo was born in Maylasky/SP, in September 1949. In 1978, he exhibited at the 1st Latin American Photography Colloquium, in Mexico and, in the following year, at the 1st Photography Triennale of the Museum of Modern Art of São Paulo – MAM/SP, among other shows. He held the individual Olho por Olho , at the Museum of Contemporary Art of the University of São Paulo – MAC/USP, in 1993. Then he developed the series São Todos Filhos de Deus , with photos of groups of people carrying the portrait of Jesus Christ in the face. Receives the JP Morgan Photography Acquisition Award in 1999.
pennaprearo.com.br

About the Publisher
The Studio Magdalene is a cultural producer who has photographic creation and diffusion as central themes of work. It was founded in 2002 by photographer Iatã Cannabrava, in which 2012 partnered with the curator and researcher Claudi Carreras Guillén.
livrariamadalena.com