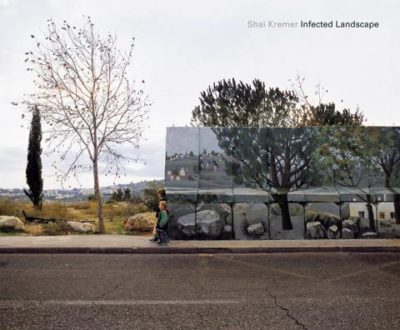 Infected Landscape by Israeli photographer Shai Kremer is a searing portrait of the military disfiguration of the landscape of Israel.
The accumulation of ruins and military remnants is an important part of what defines the Israeli landscape today – wounds in the landscape that correspond to the wounds in the Israeli collective consciousness.
The book includes photographs from the ‘Chicago’ military training centre in Israel. This centre encapsulates the history of the Israel-Palestine conflict. Over the years it has been rebuilt to represent different war environments and reflect varying scenarios – from Lebanon through to Gaza City. A further area was also constructed to simulate a refugee camp.

The newly established Urban Warfare Training Centre (unveiled to the press in 2007) also features. This is a mock city located in the southern Tze’elim military base. From a distance, it looks like any Arab urban centre. Built by the U.S.Army Corps of Engineers and funded largely through U.S. military aid, the 7.4-square-mile generic city consists of modules that can be reconfigured by mission planners to represent specific towns. Known as ‘Baladia’ by the Americans – balad, in Arabic, means village – it is used by U.S. forces as well as by the Israel Defence Force. Complete with shops, a grand mosque, a hospital and a Kasbah quarter, the UWTC even has a cemetery that doubles as a soccer field, depending on the operational scenario. In some of the houses openings have been created to replicate those that soldiers leave behind as they demolish walls in the process of moving through urban areas whilst avoiding streets and alleys. For added realism, charred automobiles and burned tyres litter the roadways. During training exercises Arabian music is played in the background. The facility is enveloped by cameras and an audio system that simulates helicopters, mortar rounds, and prayer calls.

About the Publisher
Dewi Lewis Publishing is a partnership owned and run by Caroline Warhurst and Dewi Lewis.
Founded in 1994, its photography list has an international reputation and includes books by leading British and international photographers such as William Klein, Martin Parr, Simon Norfolk, Fay Godwin, Tom Wood, Sergio Larrain, Frank Horvat, John Blakemore, Paolo Pelegrin and Bruce Gilden. The aim of the company is to bring to the attention of a wider public, accessible but challenging contemporary photography by both established and lesser known practitioners. The company has a worldwide distribution network and is recognised as one of the leading photographic publishers in the world. It publishes around 20 new titles each year.
Publisher Website