In the Face of Silence
Christophe Agou 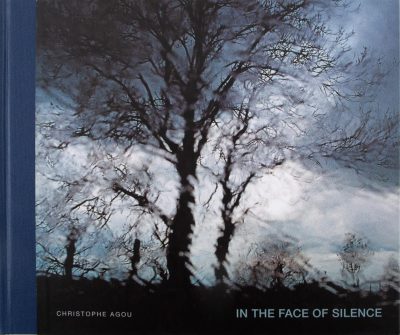 In The Face Of Silence is a powerful and moving portrait of the hard lives of French family farmers living and working in the Forez region, on the eastern side of the Massif Central. Born and brought up in the area, photographer Christophe Agou travelled to the less-known parts of the region, where he felt inspired by the silence and moved by the authenticity and charisma of the people he encountered. Over time, and through the gradual process of building trust and friendship, the farmers and their families accepted him and allowed him to both photograph and film their daily existence. The challenge was to go beyond just documenting their labour-intensive lives and present a deeper, more intimate portrait. The resultant work is a meditation on life and death as well as the silence and solitude that are ever-present in our lives.
(source: https://www.dewilewis.com/products/in-the-face-of-silence)

About the Artist
Winner of the 2010 European Publishers Award for Photography, Christophe Agou, is noted for his personal documentary-style in both black-and-white and colour photography. His intimate images both haunt and intrigue – and create an intensely rich, layered, visual language that triggers thoughts and emotions. Christophe Agou moved to New York in 1992 and came to prominence with his compelling body of work made in the New York subway – published as ‘Life Below’ in 2004. He was a finalist for the prestigious Eugene Smith Award (2006), for Le Prix de la Photographie de l’Académie des Beaux-Arts de Paris (2008) and received a ‘Mention Spéciale’ for le Prix Kodak de la Critique Photographique (2009). His photographs have been widely published and exhibited including shows at MOMA, New York; Jeu de Paume, Paris; Museum of Fine Arts in Houston; Les Rencontres D’Arles, France and Noorderlicht Fotofestival, The Netherlands.
christopheagou.com
(source: https://visura.co/FotoVisura/stories/in-the-face-of-silence)

About the Author
John Berger was an English art critic, novelist, painter and poet. His novel G. won the 1972 Booker Prize, and his essay on art criticism Ways of Seeing, written as an accompaniment to the BBC series of the same name, was influential. He lived in France for over fifty years.
(source: https://en.wikipedia.org/wiki/John_Berger)

About the Publisher
Dewi Lewis Publishing is a partnership owned and run by Caroline Warhurst and Dewi Lewis. Founded in 1994, its photography list has an international reputation and has included books by leading British and international photographers such as William Klein, Martin Parr, Simon Norfolk, Fay Godwin, Tom Wood, Sergio Larrain, Frank Horvat, John Blakemore, Paolo Pelegrin and Bruce Gilden. The aim of the company is to bring to the attention of a wider public, accessible but challenging contemporary photography by both established and lesser known practitioners. The company has a worldwide distribution network and is recognised as one of the leading photographic publishers in the world.
dewilewis.com
(source: https://www.dewilewis.com/pages/about-us)