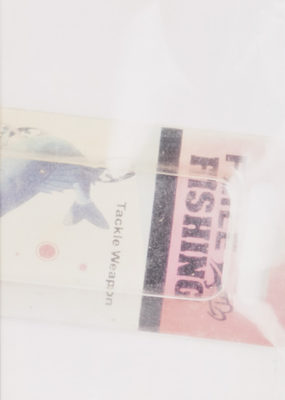 ‘Photographs go by as if they composed the remains of a lost film of which emerge only a single frame […] It is important to underline how Giuseppe De Mattia’s view can capture some aspects of the geographical conformation of the land, how some layers have overlapped: time, rain, how the salty air and wind have shaped the rocks […] But it is especially the way in which the photographs are combined that strikes the viewer: their assembly. The way a rocky declivity on the coast, cursed by remains (bags, nets, plastic, what remains, maybe, of the sea storm) is combined with an anatomic fragment, a nude shoulder, covered by moles. Assembly: lets go form the mottled rocky walls to the skin, the coetaneous layer, the photo sensible film of a body similar to the astronomical map of a far away galaxy.’

About the Artist
Giuseppe De Mattia (Bari, 1980) lives and works in Bologna. He strives to salvage and take care of what has been created by the passing of time in the form of scraps and waste. His research is often rooted in film archives such as ‘Home Movies’ (a family film archive in Bologna). His choice and selection of one or several objects is a process activated by De Mattia with different modes and tools. His practice is rooted in the concept of collecting and the obsession of utilizing objects destined to be discarded.

About the Publisher
Skinner Boox is a small independent publishing house focused on contemporary photography.