I Might Die Before I Get a Rifle
Walid Raad 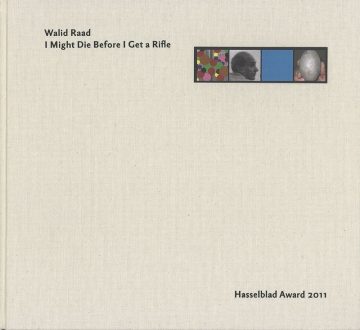 The Hasselblad Foundation International Award in Photography for 2011 has been granted to Walid Raad, a Lebanese mixed media artist, whose work is often concerned with Lebanon’s contemporary history and trauma of war. This book is published on the occasion of the exhibition entitled ‘Walid Radd – 2011 Hasselblad Award Winner’ at the Hasselblad Center in Gothenburg.

The collective work in this book are from his project entitled The Atlas Group (1989-2004), which are composed of photographs and texts that record and narrate various findings and scenes related to wars contributed by fictional witnesses. Works include photographs of military devices, gadgets, sites found with bullet marks and cartridges, bombarding scenes, resting soldiers and prints buried under the demolition in Lebanon and other parts of the world.

He was training to be an ammunitions expert in the Lebanese army. He produced the photographs as memory aids. As a militiaman he discharged these weapons. And now he has to study them. He has to look at them as technical devices. He has to essentially begin to formalize them.

About the Artist
“I have worked on a lot of ammunitions and bullets and explosions. Most of these tend to be presented as a collage or assemblage of colors, forms, shapes, numbers, lines, rarely as the killing machines that they are. They always seem to me as obscure objects, specimens to be looked at, maybe touched, and certainly collected and organized. But it’s always unclear what impact they’ve had. These situations of extreme violence can produce new ways of assimilating the data of the world, new ways of living, experiencing, feeling the world. I remember very distinctively the sound of shells and the ability to recognize incoming or outgoing mortar rounds or Katyusha rockets or the sound of a swooping F-16 plane. These experiences are as scary as they are exciting. It surprises me whenever I’m strangely thrilled by the sound of an incoming shell. You clearly feel that the destructive is also generative. The generative is also destructive.”
walidraad.com

About the Publisher
Born in Göttingen in 1950, Gerhard Steidl began working as a printer and designer in 1969. Soon the customers of his screen-printing workshop included Joseph Beuys, Marcel Broodthaers and Nam June Paik, among other well-known artists. In 1972, the first Steidl book Befragung der documenta (Questioning documenta) was published. From political non-fiction he then expanded into literature and selected books on art and photography.
steidl.de