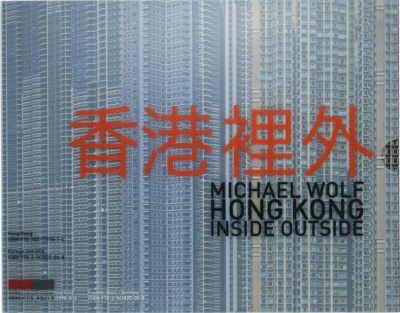 Hong Kong Inside Outside
Michael Wolf
Asia One
English

During his more than 14 years in Hong Kong, German-born photographer Michael Wolf’s perspective on his adopted city has boiled down to an essence of density – the hemmed-in, closely built environment which shapes everything from its people’s lifestyles to their outlooks and dreams. In Hong Kong Inside Outside, Wolf collects the works of his two previous collections – Architecture of Density and 100×100 – into a two-volume set focusing on the visual elements of one of the world’s most crowded cities. For Architecture of Density, Wolf’s photographic technique removed any sky or horizon line from his depictions of Hong Kong buildings, flattening his subjects until they become relentless abstractions of urban expansion. It is a disorienting vantage point, which perhaps is the spatial experience of Hong Kong’s inhabitants. In 100×100, Wolf went deeper, taking portraits of public housing residents surrounded by all their belongings. He obtains the same vantage point for each picture forming a typology that allows the viewer to study how these individuals make their confined space their own.
(source: https://actuphoto.com/12826-michael-wolf-hong-kong-inside-outside.html)