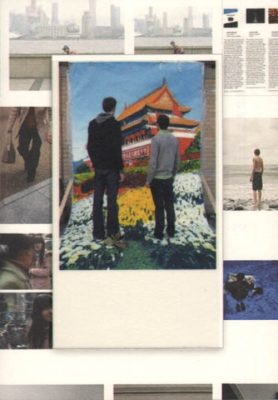 The pocket-sized ‘Hits’ is an overview of their output since 2005, and delves into both the nature of their cooperation and the dynamic this engenders in their work. More than 100 digital breadcrumbs (images and texts), spread through the Internet since the start of their collaboration, are included, plus texts by Sean O’Hagan, Bohm/Kobayashi, Merel Bem, Diane Smyth, dewham5, Tom Claxton, Michiel Goudswaard and others.
(source: https://www.ideabooks.nl/9789490119188-wassinklundgren-hits)

About the Artists
WassinkLundgren is a collaboration between Dutch photographers Thijs groot Wassink (b. 1981) and Ruben Lundgren (1983), who live and work, respectively, in London and Beijing. Their works have been exhibited in museums worldwide and they are the recipients of numerous awards, including the China Academy Award in 2010 and the Prix du Livre at Les Rencontres d’Arles 2007 for their publication Empty Bottles. Their photography and film projects shift mundane, often unnoticeable, everyday occurrences into visually compelling and gently amusing observations of the world around us.
wassinklundgren.com
(source: http://www.wassinklundgren.com/about/)

About the Publisher
Fw:Books is an independent publisher with a focus on photography and related topics based in The Netherlands.
fw-books.nl
(source: https://fw-books.nl/about-contact/)