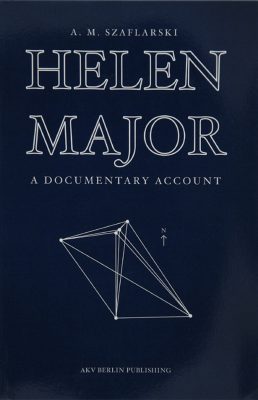 Helen Major is a non-fictional account. The adventure began in August 2008 when A. M. Szaflarski placed ads in the classifieds from the Vancouver Sun, and The Province Newspaper. The ads varied from week to week, but essentially were a call for information about ‘secret locations’ in Vancouver and were intended to function as a platform for a series of interviews. Ambiguous as the ads were, there were few responses and only one person persistently expressed her interest; a woman that called herself Helen Major. The direction of the project takes an unexpected turn when Helen misses all of her scheduled appointments with Szaflarski, and turns the project into a detective story.

About the Artist
Anna M. Szaflarski is a Canadian writer, artist and artist-book publisher.
annaszaflarski.com

About the Publisher
AKV Berlin was an art book collective run by Anna Szaflarski, Kevin Kemter, Max Stocklosa and Vincent Grunwald from 2008 to 2021. After the dissolution of the core group in April 2021, AKV Berlin continues to exist as a shell that is indefinitely in a reorientation phase which is currently accompanied by Max Stocklosa. All remaining titles will still be available at AKV Berlin as well as from AKV Schulbücher.
akvberlin.com