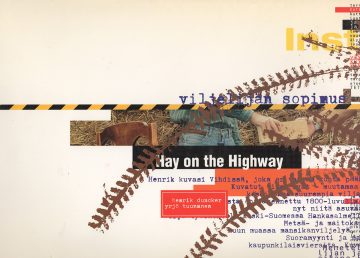 Hay on the Highway is a joint project with Yrjö Tuunanen, benefiting from the studies on interactive documentary methods. Countryside / farming family portraits from the time when Finns were contemplating joining the European Union. Shown 25 times in 11 countries, starting from Helsinki in 1993.
First prize winner of The European Photography Award 1993.

About the Artist
Henrik Duncker was born in Helsinki, in 1963, where he now lives and works as an independent photographer and artist.
Education: Master of Arts 1993, University of Art and Design, Helsinki (TaiK).
henrikduncker.com

Yrjö Tuunanen (1964–2021) graduated with an MA from the Department of Photography at TaiK in the early 1990s and his early professional career included work as a photographer and photojournalist. Later he served as a researcher at Aalto Media Factory and the Aalto ARTS’ Department of Media.

About the Publisher
The aim of the Black Hole project is to increase the export of Northern Finnish literature. The project consists of yearly events and a network for publishing industry professionals.
blackhole.fi