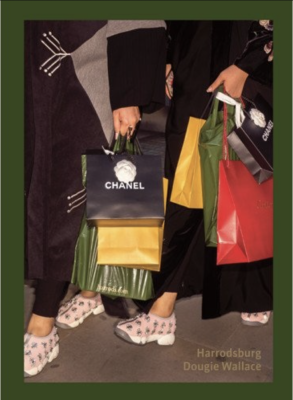 In Harrodsburg, Dougie Wallace looks at the excessive wealth and consumerism that can be found around the Knightsbridge area close to the world famous department store, Harrods. From the mid-1970s onwards, Gulf millionaires began coming to the area. They were later joined by the Oligarchs and the Hedgies, in a phenomenon that now involves all the various tribes of the global super-rich buying up London properties as if they were assets to appreciate in value rather than homes in which to live. The work is a powerful, timely and stark exposé of the emergence of this ultra-affluent elite who are changing the face of the city, pricing out not just ordinary people but even the upper middle class natives of Central London, and marginalising old wealth from their time-honoured habitats. Employing his trademark wit and keen eye for the absurd, Wallace has produced an uncompromising and revealing series of pictures which draw attention to the excesses of the super rich in powerful and direct detail.

Harrodsburg is introduced by cultural commentator Peter York, perhaps best known for his best-selling 1970’s classic The Official Sloane Ranger Handbook. Most recently, in November 2016 he presented ‘Peter York’s Hipster Handbook’ on BBC4. In less than three years Dougie Wallace has become recognised as one of UK’s leading photographers. He has published three successful books, Stags, Hens and Bunnies and Road Wallah (Dewi Lewis) and Shoreditch Wildlife (Hoxton Minipress) and has featured in major exhibitions in Europe, the United States and India. He continues to attract considerable press and media attention and his photographs feature regularly in leading international publications such as The Sunday Times Magazine.
(source: https://www.setantabooks.com/products/harrodsburg)

About the Artist
Dougie Wallace, East London-based photographer grew up in Glasgow. Internationally recognised for his long-term social documentary projects and a distinct direct style of expressive street photography. His books Stags, ‘Hens and Bunnies, A Blackpool Story’ (Dewi Lewis Media, 2014) and ‘Shoreditch Wild Life’ (Hoxton Mini Press, 2014) generated critical acclaim and a viral buzz. His book, ‘Road Wallah’ (Dewi Lewis publishing), which offers a unique insight into the world of Bombay cab drivers was published in February 2016 and has been exhibited at numerous photo festivals and gallery shows. ‘Well Heeled’ was published as a book in 2017 by Dewi Lewis. ‘Goan to the dogs’ to be published in 2018.
dougiewallace.com
(source: http://www.dougiewallace.com/hhhjjjjj)

About the Publisher
Dewi Lewis Publishing is a partnership owned and run by Caroline Warhurst and Dewi Lewis.Founded in 1994, its photography list has an international reputation and has included books by leading British and international photographers such as William Klein, Martin Parr, Simon Norfolk, Fay Godwin, Tom Wood, Sergio Larrain, Frank Horvat, John Blakemore, Paolo Pelegrin and Bruce Gilden. The aim of the company is to bring to the attention of a wider public, accessible but challenging contemporary photography by both established and lesser known practitioners. The company has a worldwide distribution network and is recognised as one of the leading photographic publishers in the world.
dewilewis.com
(source: dewilewis.com)