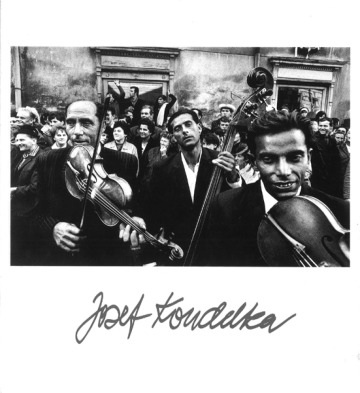 Josef Koudelka is one of the great photographers of our time. During his years of travel, he has described human conditions in many countries in his images, e.g. the everyday life of gypsies, their festivities and their cultural heritage. His photo essays are characterized by strict form and a poetic vision. They also express a strong human commitment and a socio-documentary realism.
In 1992 Josef Koudelka was chosen recipient of the Hasselblad Prize. This catalogue was published on the occasion of the parallel exhibition at the Hasselblad Center from 28 August to 25 October 1992. The photographs were taken mostly in the separated gypsy settlements in East Slovakia during the period 1962 – 1968.
(source: https://www.hasselbladfoundation.org/wp/joesef-koudelka-2/)

About The Artist
Josef Koudelka (b. 1938, Moravia, Czechoslovakia) made his first photographs while a student in the 1950s. About the same time that he started his career as an aeronautical engineer in 1961 he also began photographing Gypsies in Czechoslovakia and theater in Prague. He turned full-time to photography in 1967. The following year, Koudelka photographed the Soviet invasion of Prague, publishing his photographs under the initials P. P. (Prague Photographer) for fear of reprisal to him and his family. In 1969, he was anonymously awarded the Overseas Press Club’s Robert Capa Gold Medal for those photographs.Koudelka left Czechoslovakia for political asylum in 1970 and shortly thereafter joined Magnum Photos. In 1975, he brought out his first book Gypsies, and in 1988, Exiles. Since 1986, he has worked with a panoramic camera and issued a compilation of these photographs in his book Chaos in 1999. Koudelka has had more than a dozen books of his work published, including most recently in 2008 Invasion Prague 68. He has won significant awards such as the Prix Nadar (1978), a Grand Prix National de la Photographie (1989), a Grand Prix Cartier-Bresson (1991), and the Hasselblad Foundation International Award in Photography (1992). Significant exhibitions of his work have been held at the Museum of Modern Art and the International Center of Photography, New York; the Hayward Gallery, London; the Stedelijk Museum of Modern Art, Amsterdam; and the Palais de Tokyo, Paris.
magnumphotos.com
(source: https://www.icp.org/events/icp-presents-koudelka-shooting-holy-land-screening-at-anthology-film-archives#:~:text=Josef%20Koudelka%2C%20born%20in%20Moravia,photography%20full%2Dtime%20in%201967.)

About The Contributor
Rune Hassner was a founding member of the European Society for the History of Photography, which began in 1977. Also photographer, director and curator of the Hasselblad Centre in Göteborg.