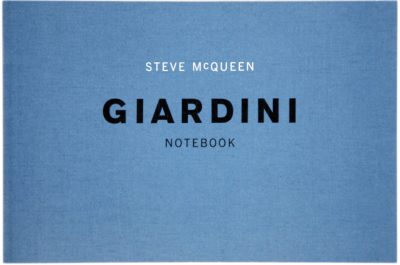 Giardini presents haunting, desolate images of both the man-made and natural environments. The images, stills from McQueen’s 2009 Venice Biennale film installation “Giardini” show the viewer the effects of man on his surroundings, but without ever showing man himself. The effect is both to implicate the reader in what he is witnessing in these scenes and also to distance him from their reality. Published in conjunction with the exhibition of the same title, at the British Pavilion, 53rd Venice Biennale, June 7-Nov. 22, 2009.

About the Artist
Sir Steve Rodney McQueen (born 9 October 1969) is a British film director, screenwriter, film producer, television writer, television producer, and television director. He is known for his award-winning film 12 Years a Slave (2013), an adaptation of Solomon Northup’s 1853 slave narrative memoir. He also directed and co-wrote Hunger (2008), a historical drama about the 1981 Irish hunger strike, Shame (2011), a drama about an executive struggling with sex addiction, and Widows (2018), an adaptation of the British television series of the same name set in contemporary Chicago. In 2020, he released Small Axe, a collection of five films “set within London’s West Indian community from the late 1960s to the early ’80s”.

About the Publisher
The British Council builds connections, understanding and trust between people in the UK and other countries through arts and culture, education and the English language.
britishcouncil.org