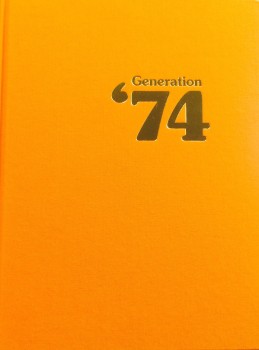 Generation ’74 profiles 11 European Photographers born in 1974.The premiere of the book took place at the Vilnius International Book fair, with the owner of the very first copy of the book being the President of Lithuania, Dalia Grybauskaitė. Introductory texts of the book lead the reader from the idea of the joint project of the 74-ers generation in European photography to revealing their similarities, differences and unique features. Every photographer’s work is presented in slots of 10 to 12 pages that start with a picture of childhood. The sequencing of photographers in the book is based on their birth date in 1974. The book ends with questions by Irina Chmyreva and every photographers’ answers to them which help reveal individual roads photography through the labyrinths of the time rich in transformations.
(source: https://www.thelibraryproject.ie/products/generation-74)

About the Artists
Simon Roberts (b. 1974, London) is a British photographic artist whose work deals with the socio-cultural meaning of landscape and notions of identity and belonging.
simoncroberts.com
(source: https://www.robertmorat.de/artists/simon-roberts-2/)

Nick Hannes (b. 1974, Antwerp) is a Belgian artist who studied photography at the Royal Academy of Fine Arts (KASK) in Ghent, where he is now a teacher. After eight years as a photojournalist, he decided to concentrate on his own documentary projects dealing with socio-political topics.
nickhannes.be
(source: https://www.hangar.art/nick-hannes-bio)

Kirill Golovchenko (b. 1974, Odessa) is a Ukrainian artist who studied photography at Darmstadt University of Applied Sciences in Germany and lives between Frankfurt and in Odessa.
kirill-golovchenko.com
(source: http://www.epeaphoto.org/review-2/epea-02/kirill-golovchenko)

Przemysław Pokrycki (b. 1974, Hrubieszów) is a Polish press photographer. He works as a freelancer and is a regular contributor to Polish magazines. Przemysław graduated from the photography department at the Film School in Łódź, Poland in 2002.
(source: https://vervephoto.wordpress.com/2008/06/12/przemyslaw-pokrycki/)

Vitus Saloshanka (b. 1974, Minsk) is a Belarussian photographer.He graduated from the University of Applied Siences in Dortmund Germany, where he studied Photography and Design in 2004-2009. His first self-published book project high hopes, 2014 was exhibited at numerous Photobooks festivals in Kassel, Paris, Amsterdam, Helsinki, Malmö, Tokio, Brighton, Dublin, Arles and Kaunas Photo 2014. His most recent work  Nemunas Journey about the border region in Russia and Lithuania was showed in Prospekto Gallery in Vilnius 2018.
(source: https://www.lensculture.com/saloshanka-vitus)

Borut Peterlin (b. 1974, Koper) is a Slovenian photographer. He studied photography at the FAMU Academy in Prague and a Postgraduate Diploma at The London College of Printing. He has exhibited worldwide.
borutpeterlin.com
(source: https://www.borutpeterlin.com/about/)

Pekka Niittyvirta (b. 1974, Helsinki) is a Finnish photographer whose work often deals with consequences of human actions, whether they are related to the society, technology, environment or the financial market. He mostly uses photography and video as a material in various ways to depict a situation or phenomena.
niittyvirta.com
(source: https://niittyvirta.com/cv/)

About the Publisher
Kaunas Photo is the longest-running annual photo art festival in the Baltic States.
festival.kaunasphoto.com