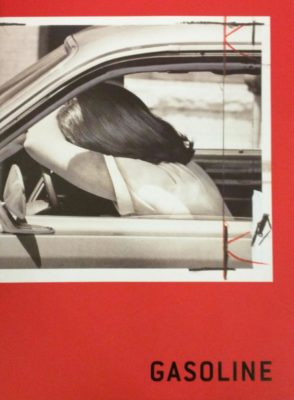 The gas station is one of the most iconic of twentieth century buildings. Recognised across the world, it is arguably most established on American soil where the notion of the road trip on a full tank of gas is culturally ingrained.

Gasoline presents 35 archive press images of gas stations taken between 1944 and 1995. They have been collected by writer David Campany, purchased from the photography archives of several American newspapers which have been discarding their analogue print collections and moving to the now ubiquitous .jpeg or .tif formats.

Gasoline can be read as a cautionary tale about the modern dependence on oil, about news photography, about the shift from film to digital imaging, or as a minor history of car design and vernacular architecture. Marked with the grease pen notations of the newspapers’ art directors, the photos tell of oil shortages, road congestion, crimes, accidents and choking cities.

Individually the images are single moments in time; collectively they show a growing consciousness about cars, the oil trade and global concern about pollution.

About the Artist
David Campany is a London based writer, curator, and artist. He writes about documentary, photojournalism, art, cinema, fashion, archives, and architecture. He has published essays on many artists and photographers including, Paul Graham, Chris Killip, Edgar Martins and John Stezaker. His books include Walker Evans: the magazine work (2013), Art and Photography (2003), Photography and Cinema (2008), and The Open Road: photographic road trips in America (forthcoming in 2014). Campany writes regularly for Aperture, Frieze, TATE, Source, and Photoworks. In 2010 he co-curated Anonymes: Unnamed America in Photography and Film at Le Bal (Paris). In 2012 he won the International Center of Photography Infinity Award for Writing.