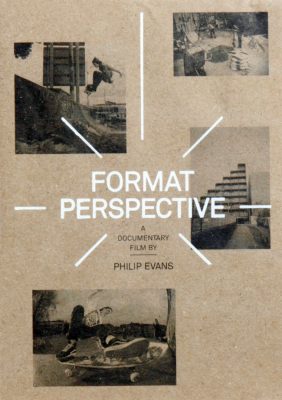 Format Perspective is a film by Phil Evans that explores the work, lives and opinions of six European skate photographers. The film showcases the photography of Nils Svensson (Malmo), Stu Robinson (Belfast), Alex Irvine (London), Rich Gilligan (Dublin), Sergej Vutuc (Heilbronn) and Bertrand Trichet (Barcelona/Tokyo), while also giving us an insight into the different approaches used by this diverse line-up of photographers. Filmed completely on Super 8 film, this project gives a behind-the-scenes look at the skating that these guys like to shoot, as well as the resulting photos that emerge from these sessions.
(source: https://www.radiotimes.com/movie-guide/b-lse4h5/format-perspective/)

About the Artist
Philip Evans (b. 1982) is a filmmaker and artist currently residing in Malmö, Sweden, but originally from Bray. This small town is where Phil discovered the magic of skateboarding and developed an inexplicable compulsion to produce a near-endless stream of skateboarding videos and silly images. His last video, The Scrum Tilly Lush (2009) documented the everyday skating habits of pro skateboarders in 11 different locations around Europe. Phil’s work has been exhibited all over the world and has been inducted into the Municipal Art Collection of Waterford City. He is part of the Human Pyramids Artist Collective.

About the Publisher
Carhartt W.I.P. is a journal started by the clothes brand Carhartt which focuses on youth culture. Although published by the journal, this photobook was not a part of the series.