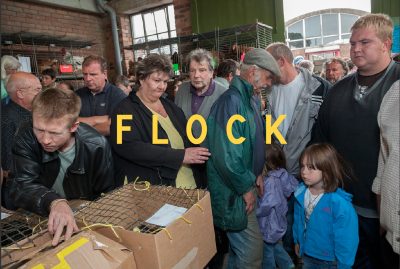 *A second copy of this photobook was kindly donated to the collection by the founder of Artist Photo Books, Christine Redmond, in June 2022.*

Made in cooperation with the regular visitors who returned weekly to a few small sales sheds at the heart of a British market city called Hereford, Flock by Ken Grant marks the end of a ritual that has been an integral part of the midlands agricultural community of Hereford for centuries. Over the course of five years, Grant – known for his long term documentary projects – returned weekly to the same spaces to photograph. In doing so he has created a tender and sustained appreciation of a community as the last inner city livestock market in Britain makes way for the next chapter in Hereford’s regeneration programme.
(source: https://josefchladek.com/book/ken_grant_-_flock)

About the Artist
Ken Grant was born in Liverpool in 1967. Since the mid 1980s he has photographed his contemporaries in the city and engaged in sustained projects, both in the region and in wider Europe.
ken-grant.info

About the Publisher
Artist Photo Books is an independent photobook publisher based in Dublin, operated by Christine Redmond.