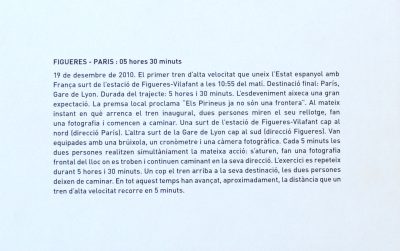 A year ago (the third Sunday of December of 2010 at 10:55 a.m.) the first high-speed train between Spain and France departed from Vilafant railway station (Figueres, Spain) towards Gare de Lyon railway station (Paris, France). The 900 km distance between Figueres and Paris was made in 5 hours and 30 minutes. That same day, and from those same railway stations, two people started a simultaneous walking action. At the exact moment when the inaugural train departed, Pau Faus walked out from the Gare de Lyon (Paris) and started walking towards Figueres. At the same time, the photographer Pere Grimau walked out from Vilafant railway station (Figueres) and started walking towards Paris. Every 5 minutes both repeated simultaneously the same action: they stopped, they made a frontal picture of the place they were at, and they continued walking on their direction. The new temporal distance between Figueres and Paris framed the beginning and the ending of this double journey. 5 hours and 30 minutes later, when the train reached its destination, both walkers took their last picture and ended the journey wherever they were. During that time, each of them walked approximately what a high speed train travels in 5 minutes. A year later (Sunday 18th of December 2011 at 10:55 a.m. at Figueres-Vilafant railway station) we present the result of that story. The book departs that day from Figueres and arrives 5 hours and 30 minutes later to Paris’ Gare de Lyon.
(source: https://bsidebooks.bigcartel.com/product/figueres-paris-5-hores-30-minuts)

About the Artist
Pau Faus (b. 1974, Barcelona) is an architect and a visual artist, living and working in Barcelona, Spain. His work is based on the exploration of today’s forms of urbanity, both physical and emotional, in order to activate autonomous and subjective interpretations of the urban behaviour. He works mainly by interacting with the local ‘ways of doing’, convinced that only through the knowledge of these everyday life practices (with its forms of conscious or unconscious resistance) one can get to understand the unique particularities of any urban place. He has made several projects and workshops in Europe and South–America.
(source: https://u-jazdowski.pl/en/programme/residencies/residents/archiwum-rezydentow/pau-faus)

Pere Grimau is a documentary photographer based in Barcelona.
(source: https://webgrec.ub.edu/webpages/000010/cat/pgrimau.ub.edu.html)

About the Publisher
B-Side Books (Self Produced & Limited Editions)  is an independent editorial project whose philosophy is to be a platform for the self-production and distribution of limited editions and books related to urban mobility and the interpretation of the territory produced and transformed by these movements. Created by Carlos Albalá & Ignasi López, B-Side Books explores different and carefully curated ways of materialising the work of artists in the world of printed publication
proyectobside.com
(source: https://bsidebooksblog.wordpress.com/about/)