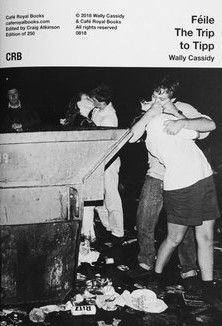 The book features pictures taken by Cassidy on the streets at the Féile festival in Thurles in the 1990s – which captured the magic and mayhem of the crowd. FÉILE was Ireland’s only largescale 3-day music festival in the early ‘90s, and a rite of passage for Irish teens, who flocked to see big-name acts take to the stage at Semple Stadium. Cassidy attended the early years of the festival, from 1990 to 1993. The resulting black and white photographs are a fascinating glimpse at a time both more innocent and more debauched. A lot of his images are anything but pretty: teens passed out on the streets of Thurles surrounded by empty beer cans, fights, couples kissing next to an overflowing skip. It’s classic black and white street photography: keenly observed, snatched moments, charged with emotion and a subtle sense of humour. “It’s about those magical moments that nobody else has seen and no-one else is going to get again,” Cassidy says.
(source: https://www.pressreader.com/ireland/irish-examiner/20180813/281547996724326)

About the Artist
Wally Cassidy is a Dublin based street photography, specialising in black and white imagery.
wallycassidy.com

About the Publisher
Café Royal Books (founded 2005) is an independent publisher based in Southport, England. It was originally set up as a way to disseminate art, in multiple, affordably, quickly, and internationally while not relying on ‘the gallery’. Café Royal Books publishes artist’s books and zines as well as a weekly series of photobook/zines. The photographic publications are part of a long ongoing series, generally working with photographers and their archives, to publish work, which usually falls into 1970–2000 UK documentary / reportage.
caferoyalbooks.com