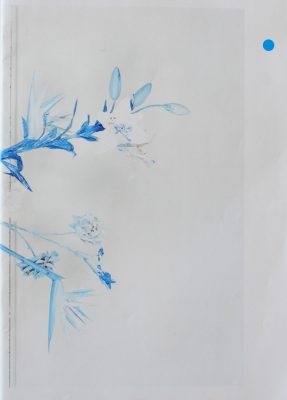 Is it possible to create a three dimensional colour separation? That was the question that triggered Jaap Scheeren and Hans Gremmen to start this experiment. A bouquet of fake flowers was arranged as starting and striving point. The next step was to create four still lifes of this bouquet: one in Cyan, one in Magenta, one in Yellow and one in Black. These still lifes were photographed and merged into one image. In theory this should have been the same as the starting point, but in practice it became Fake Flowers In Full Colour. Ilse van Rijn wrote the text ‘Phoenix’ for this publication.
(source: https://fw-books.nl/product/jaap-scheeren-hans-gremmen-fake-flowers-in-full-colour/)

About the Artists
Jaap Scheeren (b. 1979, Nijmegen) is a Dutch photographer and artist, based in Amsterdam. In his own works as well as in commissioned work he tries to stay on the narrow path of reliability. He is focussed on estrangement and pretty environment and their inhabitants. He made at least five publications; The Black Hole (i.c.w. Anouk Kruithof), Oma Toos, a Slovakian fairytale book called 3 Roses, 9 Ravens, 12 Months and together with Hans Gremmen a research into printing named Fake Flowers in Full Colour.
jaapscheeren.myportfolio.com
(source: https://jaapscheeren.myportfolio.com/about)

Hans Gremmen is a graphic designer, and founder of publishing house Fw:Books. He works in the field of photography, architecture and fine arts for clients such as Office for Contemporary Art, Norway, Aperture Foundation, Roma Publications, Darat al Funun, and TUDelft. He has designed over 200 books, and won various awards for his experimental designs. Among them a Golden Medal in the Best Book Design from all over the World competition. Hans Gremmen edited and curated various books and exhibitions about his ongoing research: the American landscape. In 2012 he made a five-hour movie about Route 66; The Mother Road, which was recently on display in the MoMA in New York. The book Edges of the Experiment, the Making of the American Landscape (2016, editor) was on the ICP Shortlist Infinity Award (category ‘critical writing & research’), and he just finished the book ‘Lookout Point’, a visual research into the first US vista point.
hansgremmen.nl
(source: https://www.skinnerboox.com/hans-gremmen)

About the Publisher
Fw:Books is an independent publisher with a focus on photography and related topics based in The Netherlands.
fw-books.nl
(source: https://fw-books.nl/about-contact/)