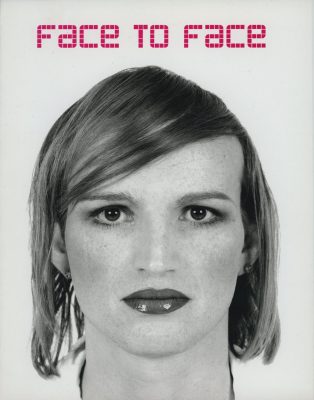 This is an exhibition catalogue for the show entitled Face to Face – Portraits in Contemporary Photography which took place from the 19th of September to the 27th of October 2002 at the Landesgalerie am Oberösterreichische Landesmuseum  and from the 18th of September to the 31st of October 2002 at Fotohof Salzburg. This exhibition featured work by Antoine D’Agata, Tina Bara, Valerie Belin, Clement Cooper, Bernhard Fuchs, Rince De Jong, Leo Kandl, Tomasz Kizny, Nina Korhonen, Anett Struth and Mette Tronvoll.

As a result of collaborative research from both institutions, work was shown from eleven different European artists in accordance to the theme of the exhibition. In addition to architecture and landscapes, the confrontation with the portrait proves to be a central focus of contemporary photography. Each of the eleven positions presented follows its own iconographic concerns in dealing with a gegenüber. The exhibition project attempted to move closer to this phenomenon through the analysis of artistic concepts of, and approaches to the human image.
(source: introduction in pamphlet)

About the Organisations
Fotohof Salzburg has been publishing books and catalogues by Austrian and international photographers since its foundation in 1981. Over 300 mainly monographic titles have been published so far, generating a publishing house with international distribution channels.
fotohof.net
(source: http://fotohof.net/content.php?id=71)

The Oberösterreichische Landesmuseum (Upper Austrian State Museum) is a cultural institution of the state of Upper Austria. It consists of three main locations in Linz , the Francisco Carolinum, the Castle Museum, the Cultural Quarter and the Biology Center – as well as several museums, memorials and collections throughout the state of Upper Austria. The Upper Austrian State Museum has been managed by Alfred Weidinger since 2020.
blog.ooekultur.at
(source: https://de.wikipedia.org/wiki/Ober%C3%B6sterreichische_Landesmuseen)