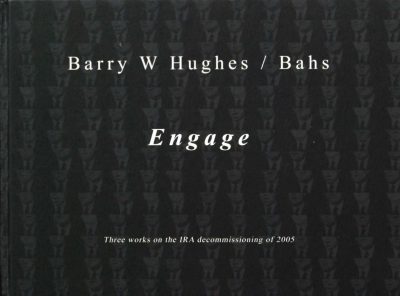 This book documents three projects which deal with the Provisional Irish Republican Army’s decommissioning process of 2005 and the subsequent reporting by the media, political parties and concerned individuals, with special attention to the language used. I wanted to make a body of work on this subject for two reasons: that these historical events, such as IRA cease-fires, were being immediately played out live on television and in the media, and that the Northern Ireland Peace Process was not particularly high on the list of popular subjects for artists of my generation, especially in the Republic. Produced for the Engage exhibition, Shanghai Jing An District Culture Centre
(source: foreword)

About the Artist
Barry W Hughes’ photographic works occupy a liminal space between scientific and subjective description. Various tactics, sometimes deceptive, are employed to reflect upon contemporary photographic image culture. Hughes’ works reference particular scientific, pseudo-scientific and social moments that often involve a degree of coincidence within their respective narrative. Born in Dublin, Ireland, and resident in the UK, photographer, writer and editor Barry W Hughes’ works have been published and exhibited internationally, including solo exhibitions in Ireland, Germany and China.
barrywhughes.com

About the Publisher
411 Galleries is based in China.