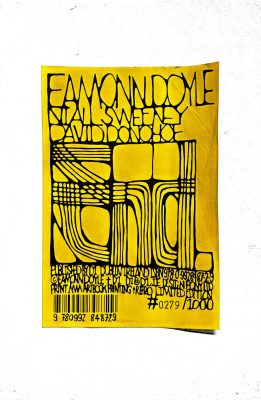 Created as both installation and publication, End. is a collaborative work by Eamonn Doyle, Niall Sweeney and David Donohoe. Built around the photographs of Doyle, it also features drawing and sound by Sweeney and Donohoe. End. gives equal significance to the city and its population, their combined forces continuously shaping each other. Individual journeys of everyday life are compacted repetitively into the same streets. Dubliners wear away at the autonomy of their city, while the streets themselves become a kind of sculptural civic mental State. Dublin, its light and its people, carry out dance-like actions, swapping roles in a series of short plays. End. unfolds as a sequence of events, loops of time and place, revealing a city whose concrete is as plastic as the movement of its inhabitants.

About the Contributors
Niall Sweeney is an artist and designer from Dublin, Ireland. He is one half of Pony Ltd, a graphic design studio based in London.Working in Britain, Ireland and internationally, output at the studio ranges from popular culture to the avant-garde, from high-brow to low-brow, creating for print, screen, three dimensions, sound and performance. Niall previously released HEAD, a series of 60 original monochrome paintings, with Hen’s Teeth in November 2017 in the RDS.

David Donohoe is a highly experienced designer and creative director working in design for screen and print in Dublin.
daviddonohoe.com