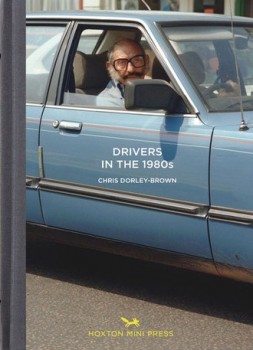 Chris Dorley-Brown spent two summers in the mid 1980s photographing drivers stuck in traffic jams in and around East London. This series was his first on colour film and was created when he intended to document the privatisation of Rolls Royce but instead became fascinated by the faces in the traffic caused by the sell-off in the city. The cars, colours, haircuts and expressions of frustration capture the mood and tone of a unique era in Thatcher’s Britain.

About the Artist
Chris Dorley-Brown set up his own photographic practice in 1984 concentrating on documenting East London. In a series of residencies and commissions focussing on social housing, workplaces, hospitals and architecture, he has established a substantial archive of images that are re-purposed and re-contextualised for distribution via web, film, exhibition and publication. Project partners have included the BBC, Museum of London, Homerton Hospital, the Wellcome Collection and various London Borough archives. He often works with re-energising existing archival material as part of creating new works. Recent publications include photo books The Longest Way Round (Overlapse, 2015), Drivers in the 1980s (Hoxton Mini-Press, 2015), The Corners (Hoxton Mini-Press, 2018) and The East End in Colour: The Photography of David Granick (Hoxton Mini-Press, 2018). Chris lives and works in East London.