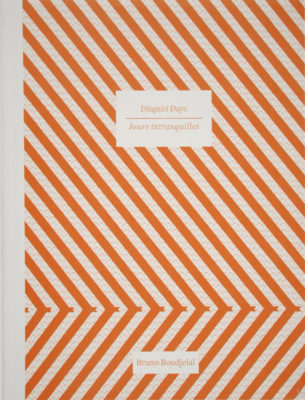 Bruno Boudjelal’s chronicle of 11 years of inquiry into his origins, his identity and his unknown family, set against the background of an Algerian state in the process of turning its citizens against each other, abandoned to their own resources. This journey, at once personal and familial, but also topographic and political, is described with intimacy and sensitivity and with a sense of discovery as he acts as an often unwilling witness to the violent events of everyday life. The universal relevance of this story of a search for what is true in one’s own biography emerges out of a mist of lies and dissimulation, and is overlaid on recent Algerian events that are shrouded in falsehoods and ignorance.

The book contains an essay by Salima Ghezali, journalist, writer and former editor of the weekly La Nation, which was banned by the Algerian authorities in 1996.

‘So it was quite natural that the quest for an identity was supplemented by a documentary examination of an Algeria that I was starting to discover and to photograph. In the course of time and during a series of different journeys, I progressively added to an account that mixed narrative and documentation – a story told through images that attempt to close in on a very complex reality. The more complex the reality became, the more interesting was the divergence of points of view.’
– Bruno Boudjelal

About the Artist
Bruno Boudjelal (b.1961) is a Franco-Algerian photographer from Montreuil. He lives near Paris.

About the Publisher
Autograph’s mission is to enable the public to explore identity, representation, human rights and social justice through work produced by artists who use photography and film.