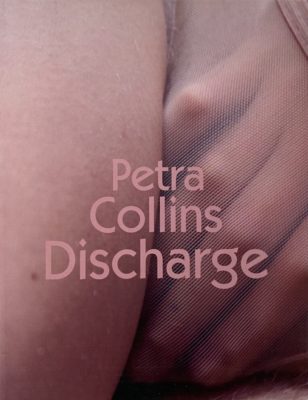 In her highly anticipated book, Discharge, New York-based artist and photographer Petra Collins presents images of self-discovery and femininity that explore the emotional, complex intersection of life online and off. Responding to the ubiquity of social media, Collins offers images of unflinching honesty, exploring the privacies and publicities of growing up as a woman at a moment when female bodies are ubiquitously hyper-mediated by Photoshop and social media. “I’m used to being told by society that I must regulate my body to fit the norm,” Collins writes in her introductory essay on censorship and social media. From there, the book deconstructs that norm through her intimate photographs of friends. Discharge includes a discussion between Collins and Tavi Gevinson, moderated by artist K8 Hardy. In that conversation, Collins says that she is “an onlooker rather than the subject.” Collins challenges the notion of spectatorship in an age in which everyone is looking at everyone.

About the Artist
Petra Collins (born December 21, 1992) is a Canadian artist, photographer, fashion model and director who rose to prominence in the early 2010s. Her photography is characterised by a feminine, dreamlike feel, informed in part by a female gaze approach. She was a resident photographer for Rookie magazine and a casting agent for Richard Kern. She has also directed a number of short films, including music videos for Carly Rae Jepsen, Lil Yachty, Selena Gomez, Cardi B, and Olivia Rodrigo. In 2016, Collins was chosen as a face of Gucci. She has been labeled an “it girl” by photographer and mentor Ryan McGinley and by Vanity Fair and The New Yorker magazines.

About the Publisher
Capricious is an arts foundation based in New York focused primarily on book publishing and an annual photo book award, with an emphasis on supporting intersectional, queer perspectives.