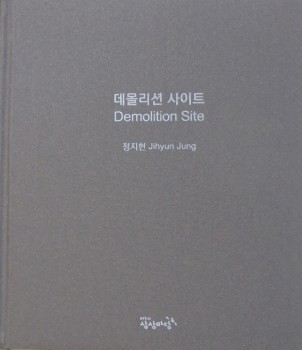 ‘Demolition Site’ of Jihyun Jung shows us the artist’s traces left in a demolition site in redevelop area. We think we have been used to those sites but at the same time in some way we haven’t. People both desire and feel uncomfortable about newly built cities, which are built only for political and economic benefits trampling on their past.

About the Artist
Jihyun Jung was born in Seoul, Korea, and received a B.F.A at the Seoul Institute Of The Arts in photography in 2005, an additional B.F.A at Chung-ang University, Department of photography, Gyeonggi-do , Korea Seoul in 2010, and an M.F.A at Chung-ang University, Department of photography, Seoul, Korea in 2012. He has exhibited widely including solo and group exhibitions through out Korea and Europe, and has received various awards and residencies. Jihyun Jung explores the deconstruction of architecture in his project, Space Between Creation and Destruction.

About the Publisher
KT&G SangsangMadang, a multi-culture complex opened in September 2007, provides a great support in order to create new culture by proposing and sharing various fields of trends including performance, film screening, design, visual arts and education.