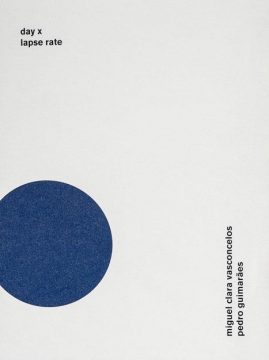 Day X is a series of 5 publications, each featuring a one-day collaboration between a writer and a photographer working in Europe.

Book No.1 : For the first book in the series, Lapse Rate, photographer Pedro Guimarães and writer Miguel Clara Vasconcelos travelled from Lisbon to Gibraltar contemplating death, borders and aviation. The trip took place 29-30 July 2016.The book was published in September 2016.

About the Artists
Pedro Guimarães is a Portuguese self-taught photographer currently living in Lisbon. Besides having a career as a commercial photographer, shooting stories and portraits for magazines and newspapers from all over the world, Pedro got involved in the photobook publishing scene back in 2010 when he co-founded the small bookshop and publishing company XYZ Books based in Lisbon.
pedroguimaraes.net

Miguel Clara Vasconcelos is an award winning Portuguese film director, writer and independent producer, based in Lisbon. He studied Classic and Portuguese Literature at the Universities of Lisbon and Coimbra, (2000) and holds a master’s degree in Cinematographic Studies from the Sorbonne, Paris, (2012). His film The Golden Triangle (16mm, 18’, 2014) won the Best Film Award at 22nd Curtas, Portugal and Nominations for Best film at 7th Janela, Brazil, Selection 44th Rotterdam, Netherlands and at the 69th Edinburgh International Film Festival, Scotland.

About the Publisher
Paper Tigers Books is an independent publisher of limited edition artists’ books and multiples founded by photographer Laura Braun in London in 2011 in order to publish her own work as well as that of collaborators and friends.
wp1119024.server-he.de