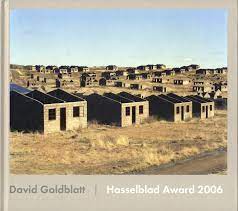 When David Goldblatt received the world-renowned Hasselblad Award in 2006, he had been making photographs of the South African landscape and culture for more than 50 years. Born in 1930 in a gold-mining town near Johannesburg, his parents were Jewish refugees from Lithuania, and they raised him with an emphasis on tolerance and antiracism. In 1975, at the height of apartheid, Goldblatt explored white nationalist culture in Some Afrikaners Photographed, and in the 80s he observed workers on the Kwandebele-Pretoria bus, many of whom traveled eight hours every day to work and back. His late-90s solo show at New York’s Museum of Modern Art focused on architectural work, and showed off Goldblatt’s uncanny ability to discover a society through its buildings and landscapes. His photographs of architectural structures revealed the ways that ideology had defined his home country’s landscape.

About the Artist
David Goldblatt, born on November 29, 1930 in Randfontein, South Africa, began photographing at an early age but his father’s illness required Goldblatt to run his family business while studying at Witwatersrand University in Johannesburg. After selling the company in 1963, Goldblatt focused entirely on a career in photography. His involvement with various artistic circles in Johannesburg granted him access to a broad range of ethnic and socioeconomic groups. Though he refused to belong to any political organisation and argued that his photographs should not be used for propaganda purposes, his works were presented in an exhibition organised by an anti-apartheid photographer’s collective in 1990. In 1998, Goldblatt became the first South African artist to have a solo exhibition at The Museum of Modern Art in New York. The artist died on June 25, 2018 in Johannesburg, South Africa. Today, his photographs are held in the collections of the South African National Gallery in Cape Town, the Victoria and Albert Museum in London, and the Fotomuseum Winterthur in Switzerland, among others.

Hatje Cantz publisher are committed to this motto more than ever – with our accustomed high quality we remain faithful to the standards set by Gerd Hatje: premium books that are produced in close collaboration with artists and curators. Our profile has always been shaped by tradition and avant-garde from all over the world. We present our program  in a bilingual preview catalogue, in which masters of the twentieth century such as Paul Klee, Paul Gauguin, and Eva Hesse meet contemporary artists such as Michael Borremans, Gerhard Richter, and Filip Dujardin.